Situated along Barcelona´s most famous shopping street Passeig de Gracia, Casa Amatller and Casa Batlló make up what is known as “The Block of Discord”, along with Casa Lleó Morera a little further down the block. Designed and built by three different architects, the unique style of each building is what gives the collection of buildings its name. 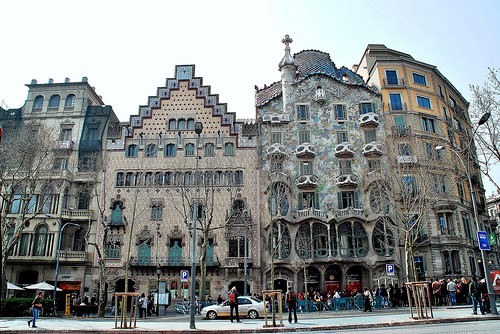 The building was originally built by Antoni Robert in 1975 and then in 1898, architect Josep Puig i Cadafalch was commissioned by the Amatller family to carry out its refurbishment. The current building is from Puig i Cadafalch´s modernista period.

The design was based on the typical Catalan mansion with Germanic elements incorporated in. Casa Amatller´s basic layout is the typical urban gothic residence, where one block of flats is made to look like one single, splendid building. The Germanic element can be seen in the bold, ridged frame of the building highlighted with ceramic tiles.

More information can be found on the official website

Situated right next to Casa Amatller is Casa Batlló, designed by Antoni Gaudí and built between 1904 and 1906. Like with Casa Amatller, Gaudí was commissioned to re-design Casa Batlló.

The façade of the building, composed of stone and glass, is very fantastical and disseminates Gaudí´s imagination and talent as an architect. The original façade was completely replaced and re-shaped into the wavy masterpiece it is now.

The bendy glass is particularly captivating. Above the façade, the roof resembles an animal´s back and is covered in multi-coloured scales.

Visit Casa Batlló for €23.50 during the day or pay €36 to visit before the official opening hours and have the whole place to yourself and just 19 other people – the best setting for making beautiful photographs.

More information can be found on the official website.