November is coming and everyone is looking forward one of the best parties of the autumn calendar.
In addition, some years has been secured to the traditional festival of the chestnut, the celebration of Halloween ago.
The city wears an orange-brown tone to enjoy both, more traditional celebration like eating boniatos, chestnuts, panallets and have a great time with the craziest part with Halloween.
That is why we want to tell you about the different plans offered by Barcelona in one of the quotes of the year.

The Castañada in Barcelona; the more traditional side of the city. 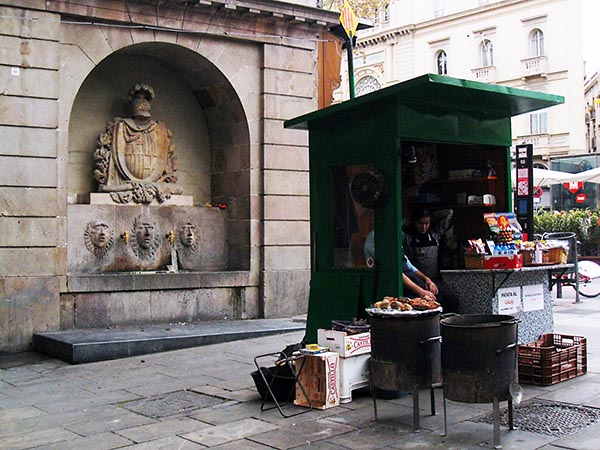 Barcelona City Council has a website with all the information about the history of the festival and the more traditional aspects, the activities scheduled for these days and all information on the positions of chestnuts stops sales that are scattered around the city.

In this festival, the chestnut is the main protagonist as a representative of autumn product.
It is fire-roasted fruit sold wrapped with newspaper and have a characteristic odor that all known living in Barcelona. You can not help them out!

In addition, other typical gastronomy these days tastings are boniatos. Like potatoes but sweeter and orange, it is one of the best known of the autumn cooking ingredients.

And finally, the famous panellets. Pine nuts, almond, coconut, marzipan … there are endless varieties of panallets. These are small sweets that are served in the popular feast of All Saints on November 1, a long tradition in Catalonia.

HALLOWEEN in Barcelona; terror plans to have a great time.

Halloween is a holiday that dates back to the Celtic culture, but it was thanks to the Anglo-Saxon countries like the United States that has become so famous in Barcelona.

Whether you live in the city as if you’re on vacation, there are many things to do during the night of October 31st.
We tell you some!

1. If you are passionate about film and horror movies, these days best for a marathon of films in the Phenomena Experience right next to the Sagrada Familia and our apartments. All information here.
2. For Halloween night is genuine terror, there are several night tours through the streets of the city suitable only for the brave. You dare?

3. Clubs as Razzmatazz organized Halloween theme parties where you have to go dressed in the scariest costume. If you want to feel like Michael Jackson in the music video thriller, we leave a list of events to enjoy the night of October 31 all out.

That’s, you will not leave without plans if you want to celebrate Halloween and castañada in Barcelona.
What activity do you prefer?