Welcome to Barcelona, a city with culture, good food, architecture, streets to explore, charming squares where take a little break, clothing stores, shoes and local design and a great nightlife.

But if you need a little guidance for a weekend o 4 days, in Fuster Apartments we want explain a fantastic route around the city. Check out this post and enjoy it! ☺ 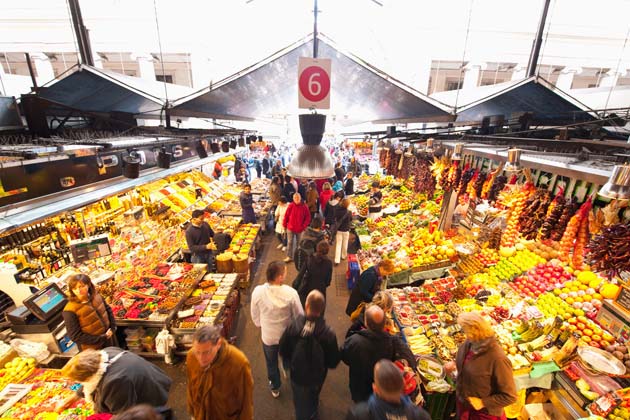 The route starts at Plaça Catalunya, the nerve center of the city, both for shopping and public transport. Here are the famous department stores like El Corte Ingles.

However, going in the historic center is essential to know Barcelona. You can start with the Ramblas with all its stalls and tour the Gothic and Born neighborhoods. Are the old quarters of Barcelona who have a typical Catalan style.
More precisely, in the Gothic Quarter, you can visit the Cathedral of Barcelona, a Gothic cathedral built between the thirteenth and fifteenth centuries on the old Romanesque cathedral. We invite you to discover more detail of Barcelona Cathedral here in our Barcelona guide.

There are two buildings facing each other: the Palau de la Generalitat (right hand coming from the carrer del Bisbe), seat of the government of Catalonia. And Ajuntament de Barcelona (on the left). In the corner of Plaça Sant Jaume carrer with the Llibreteria, you can discover Conesa, a famous snack local of Barcelona.

This pretty square houses the Church of Pi, which can be accessed. It is a place with great artistic atmosphere with street painters exhibiting their works. If you look right at the carrer of Petrixol, you will find on the wall depicting a “Auca” how the Catalans explaining their folktales and one of the most famous, the Lord auca Esteve. Right next door, you will find the Chocolatería Dulcinea, perfect for the classic hot chocolate with churros.

Then we recommend going to the Mercado de Sant Josep, known as La Boqueria, which is an original market of XII century. It is the largest in Europe and certainly the most famous of Barcelona. Highlight its art nouveau entrance and curious put some of them specialized in a single food (bananas, eggs, cod …). In the Boquería there are plenty of places to eat. Undoubtedly the most famous is El Quim de la Boqueria. His best dish is fried eggs with Llanqueta (small fried fish), although they are not available all year.
If there are too many people in the Quim, other good places to eat in the Boqueria are Pinotxo and Universal. Both food market of high quality and somewhat lower than the prices Quim.
If Boqueria is closed on the day that you visit, we recommend the Irati, one of the best Basque bars in Barcelona.

La Rambla de Catalunya, runs from Plaza Catalunya to Avenida Diagonal. It is full of shops ideal for a luxury shopping.
Once you have reached Avenida Diagonal, we recommend reach the Passeig de Gracia (which is parallel to Rambla Catalunya), the most glamorous street of Barcelona and one of the best places to enjoy the architectural modernism of Barcelona. On this tour you will find the following two visits.

La Pedrera was the last great civil work with Gaudí before dedicating himself entirely to the Sagrada Família. Gaudí projected a fantastic house with undulating and living forms. Besides of the façade, pay attention at the attic and roof with curious chimneys. Gaudí projected buildings as if they were paintings. La Pedrera represents the Mediterranean with its waves, while chimneys are the helms attentive to the arrival of pirates and invaders lookouts.

Casa Batllo is one of the most renowned works of modernist Catalan architect Antoni Gaudí and stresses, not only for its spectacular facade but also for its interior. It is in the “apple of discord” because in it besides this building, are other works by contemporary modernist architects with very different styles. La Casa Batlló represents the dragon killed by Sant Jordi, patron saint of Catalonia. On the facade you can admire the skin of different colors of the dragon, while the columns of the lower floor are the bones of the knight who were swallowed by it. The balconies also represent the helms of these knight. The roof of the house is the dragon’s back with his scales while the tower is the sword of Sant Jordi stuck in your skin. You can see how the handle represents the cross of Sant Jordi.

Then we recommend you visit the Sagrada Familia and Parc Guell, other emblematic works of Gaudí.

La Sagrada Familia, world heritage according to UNESCO, is the most gigantic work of Antoni Gaudí. Cathedral Modernist inspired by nature forms. Was initiated in 1882 and Gaudi took over the work when he was only 31 years old, dedicating the rest of his life, the last fifteen exclusively. When Gaudí died in 1926, it had only built a tower, and after more than 120 years, its 8 current towers are far from the 18 projected.

The Park Güell is a large garden designed by architect Antoni Gaudi. Conceived initially as urbanization, it was opened in 1922 as a public park (the developer of the urbanization failed to sell the houses). It is the best example of naturalistic stage of the Catalan artist, whose main source of inspiration was the organic forms of nature.

Day 3. Walk through the Born 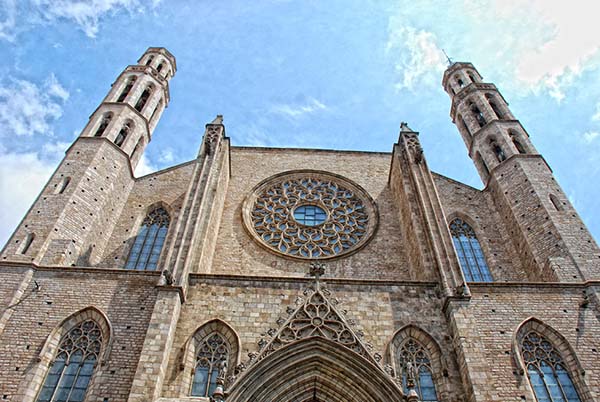 We started in the Born district. Do not miss the opportunity to visit the Born Cultural Centre, an imposing structure of iron and glass built in 1876 and was the central market of the city. Now has a library and a dining area and mainly hosts exhibitions and archaeological remains of the eighteenth century Barcelona.

From there you can go to the beautiful church of Santa Maria del Mar, a space of tranquility, not only spiritual. Right next door is the Fossar de les Moreres, a square that could be overlooked, but it has great value for Barcelona, and was built on a cemetery where he was buried who died fighting for the defense of the city during the siege of Barcelona in 1714. Its main element is a cauldron with a flame that never goes out, in memory of the fallen.

Relax in Born squares and visit the Picasso Museum.

You can relax in one of the lesser known places of Born, Sant Pere de les Puelles or Sant Agusti Vell. If what you seek, however, are great works of art are in luck, because you meet in the streets near the Museu Picasso, which houses works from the formative years of Picasso young that happened fairly close in school art La Llotja.

If when you travel you dedicate yourselves also time for shopping, Born is full of shops where you can find designer shoes or different gift items. Examples are Ivori, an exquisite shop with local designs, On land, with pieces for men and women, or Studiostore, offering everything from clothing or glasses cases very original cushions.

Following your way you will come to the Parc de la Ciutadella, ideal for fresh air and get an idea of how the locals use this large green space place: sport, picnic, play games, listen to music or relax with a good book next to lake. 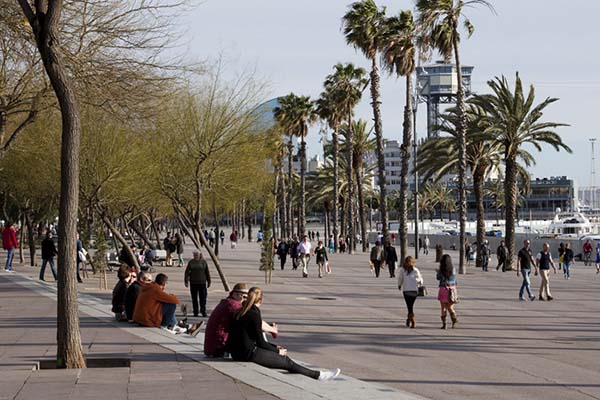 At the end of the Ramblas you will arrive at the Port Vell. We recommend walking (or cycling) from here to the sea Barceloneta -looking to left.

It is located at the end of Las Ramblas. It is one of the most famous monuments of the city. You can get inside and climb to a lookout beneath the statue.

You will see a huge stone building. It is part of the old “drassanes” of Barcelona, the workshops that since the thirteenth century were built hundreds of boats. Today is the Maritime Museum of Barcelona.

Here you will see a large bridge across the harbor to connect the earth with an artificial island. This is the Maremagnum shopping center.

If you cross to the other side of the Plaça del Portal de la Pau and begin to walk towards the Barceloneta, you shall leave to your right the Port Vell. While you may walk, do not fail to also look at the majestic buildings across the Passeig de Colom.

Barceloneta is a seaside neighborhood built during the eighteenth century in order to accommodate the inhabitants of the neighborhood of La Ribera, who had lost their homes, sent by Philip V demolished to build the Arsenal of the Citadel. This neighborhood is frequented by locals on weekends for lunch and to get closer to its beach, the Playa de la Barceloneta. In addition to its beach, worth walking along Passeig de Joan de Borbó. Barceloneta is the first of the beaches of Barcelona, the closest to the center of the city and usually have more room.

Now you just need to discover for yourself the culture, history and other charms of the city of Barcelona!