The Gràcia Festival, which will take place between 15 and 22 August 2016, is considered by many people to be the best, most beautiful, festive and welcoming festival of Barcelona.

From the blog of Fuster Apartments we want to explain you in what consists the Gràcia Festival and what you can not miss to enjoy it most.

A lively and very popular cultural festival in Barcelona:

The Gràcia Festival is a local celebration of Barcelona where its entire organization takes place in the streets of Gràcia. The Fiesta de Gràcia lasts over one week: exhibitions, children’s activities, workshops, sports activities, parades, performances by various artists, dance, theater and more.

In the squares of the neighborhood as the Plaza del Sol, or Plaza de la Vila de Gràcia you can attend concerts of jazz, rock and even classical music. And for food lovers, there is also a section devoted to it.

Every year, thousands of people walk through the bustling streets of the neighborhood dancing and having fun.
Although the concerts usually end at 2:00 a.m., the party continues late into the night. The Gràcia Festival is undoubtedly one of the most colorful and lively festival of Barcelona.

The Festa de Gràcia, a result of the neighborhood urbanization in the nineteenth century:

The Festa Major de Gràcia is a relatively young festival.

Gracia was an independent town of the city of Barcelona, a small core of rural population that has been integrated to the city in 1897. Gràcia still has the narrow streets of its XIXth century infrastructure and an inherited atmosphere of that time which gives it a special atmosphere. In fact, Gràcia had experienced in the nineteenth century an extraordinary mutation and became a village of artisans, laborers and small traders. Gràcia only had 3,062 inhabitants in 1828, but the neighbourhood turnes out to have 61,935 in 1875.

The first Festival de Gràcia took place in August 1817. The festival consolidated in the mid and late nineteenth century and was defined in a more civic than religious sense, under the impulse of many workers and recreational entities, as Ateneos or Dance companies.

A party organized by the residents of Gràcia themselves:

Las Fiestas de Gràcia always offer a varied program of activities for both adults and families and children throughout the day.
This festival is organized by neighbors and families of Gràcia and like all festivals in Spain and Catalonia, was originally only for residents. But the originality and beauty of the decorations of Gràcia have made it world famous and now people come from all over the world to experience Barcelona.

About 18 streets and squares of Gracia, and like every year, will be decorated for this 2016 edition. The decoration is made by residents of the neighborhood: they spend countless hours in transforming the streets into a fantasy world with decorations and carnival themes. True handmade charms that gives to the festival a distinctive touch that the other festivals in the city don’t have.

The decorations themes change every year and contests are organized to choose the best decorated street or even to choose the next poster of the Gràcia Festival. 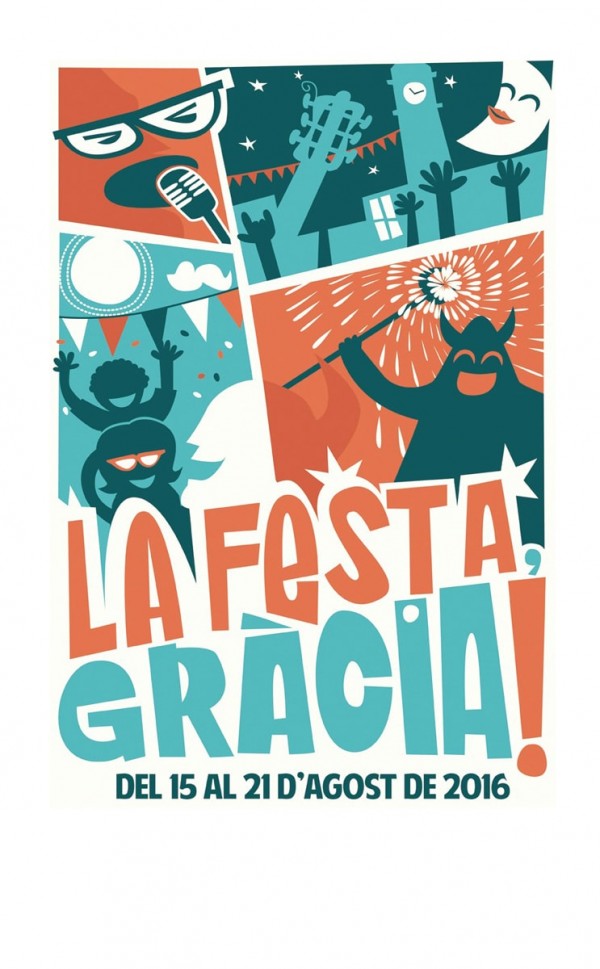 Activities and traditions that you can not miss:

In many places of the Gràcia district you will find concerts, stalls selling food, drink and craft items. Among of the main squares of the most important festival of Barcelona are the Plaça del Sol, Plaza del Diamant, the Revolució square, the square of the Dones 36 and Plaza Manuel Torrente.
One feature of the Fiesta Major de Gràcia, like all major Catalan festivals, is the rich presence of all Catalan cultural traditions.

We present some customs characteristics of the party:

1. Presentation of the shirt and streets, squares and places of the festival.

On a Friday , the closest to the festival of Santiago, the Gràcia Festival opens with a presentation of both the Festival places and of the T-shirt editions . It all starts with a parade with the Gigantes de Gràcia, the castellers, the neighborhood trabucaires and the gegantó Torres, who walks along the streets of the town until arriving right in front of the political center of the District.

Once there, the castellers make two pillars to present the new commemorative T-shirts of the festival, which bears the enxaneta. Then the gegantó Torres, main figure of the act, offes a dance and put the shirt of the Festival of Gràcia, which will set up the following year.

Then each street and square of the city where takes place the festival is named and, after it, the Trabucaires de Gràcia boast from the balcony of the City Hall. The event ends with a concert of the Municipal Band of Barcelona. 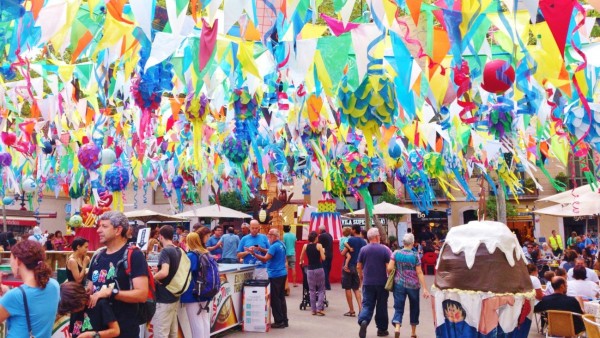 In the morning of August 15, a public holiday, the Matinades de Gralles and the Matinades Foc start to parade through streets and squares and to announce the party beginning. The first are composed of drummers and they visit the decorated streets portals; the latter, formed by the “colles de fuego” and trabucaires, undertake a parade through the downtown area of ​​the neighborhood. 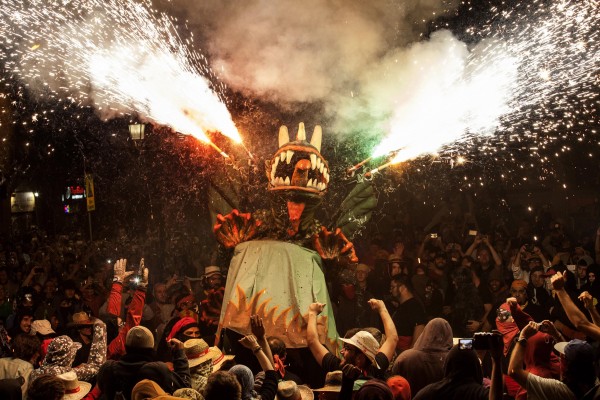 Although for years that the parties have a character especially civic, Mass is held in honor of the Virgin of August. Representations of various troupes of folk culture of the district are integrated into the liturgical act: enter the gegantons and bigheaded, giants offer dancing and castellers, a pillar of quatre. 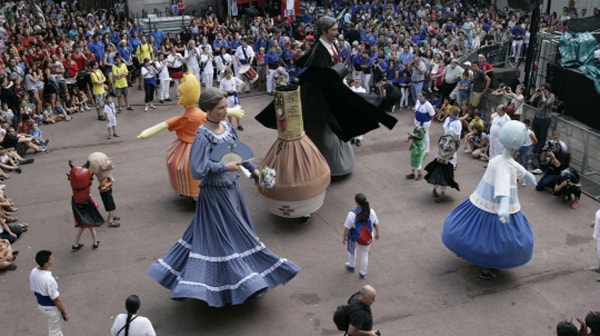 Samples of popular culture abound on the day of the festival. In the afternoon, there is a parade of popular culture (colles de Gràcia) along with other invited colles -of all over the country and from outside- , through the streets of the neighborhood, with a final brilliance in the Plaza de la Vila de Gràcia. 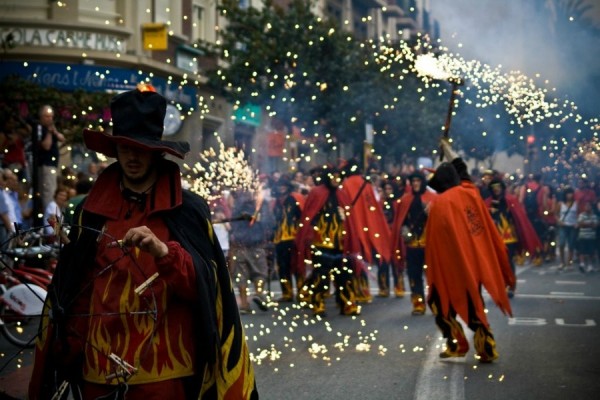 August 16 is the feast of San Roque day, and the Gràcia Festival program includes a group of events to honor him. Among others, a parade from the Plaza de la Vila de Gràcia to the chapel of Sant Roc is organized (at the junction of the streets of the Fraternitat and Llibertat). 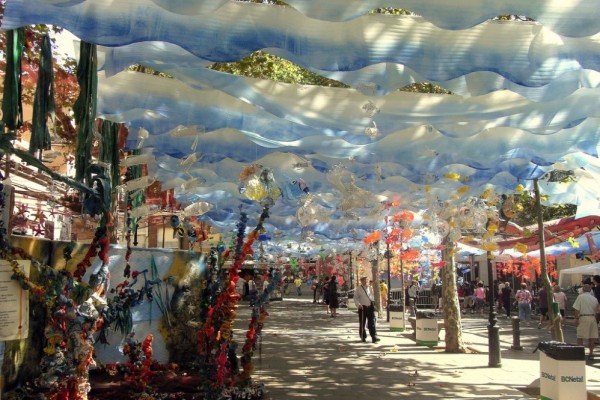 6. castellera National Day and other performances.

Castellers occupy a very important role in the festival program instead. The most important activity is the diada castellera, occuring during the closest Sunday to August 15th in the Plaça de la Vila de Gràcia.
The Castellers of Vila de Gràcia are the hosts, and they involve two guest troupes. Apart from the festival, the castellers appear in some other acts with very concrete pillars -in the Festival Mass or durong the offerings to San Roque, among others, and are featured in two moments: the caminat pillar, which consists in conducting a tour from the Plaza del Sol to the Plaza de la Vila de Gràcia, and the National Day of Vigílies, with night performances of the Castellers de Gràcia and a guest colla. Everything happens on the eve of the Sunday festival.

The third or fourth day of the festival, the Plaza de la Vila de Gràcia hosts a show that explains the origins of the neighborhood until its annexation to Barcelona. During the act, narrative texts and performances by troupes of folk culture of the district interleave.

And during the last night of the festival, there is a large firework with devils and beasts of the troupes de Gràcia and other guests. When the tour ends in the Plaza de la Vila de Gràcia, each colla light sparkles. Devil young boys also have a protagonist moment a few hours earlier, when a child run correfoc goes through the central streets of the neighborhood.

If you want more information on the festival programme and on the schedules of the various activities, you can find it here.

Useful information and how to get to the Gràcia Festival:

The neighborhood of Gracia is at 20-minute walking from the northwest of the city center of Barcelona. It is easy to find the Gracia district. From the center of Barcelona it only takes 15-20 minutes walk from Passeig de Gràcia and Plaza Catalunya.

You also have the Fontana stop Metro line 3 that can bring you to Gràcia. Also near the district of Gracia, you have the metro Diagonal Verdaguer Line 5 and Line 4. The latter two are just a few minutes from the center of Gracia walking.

The Gràcia Festa Major is the most acclaimed festival of Barcelona during the summer so we recommend you to discover it with family or friends and to not miss the different activities proposed.