Summer has come and with it, good temperatures. As a consequence, during this period Barcelona is transformed in a spectacular way. Indeed, you just want to leave home to enjoy the sun outdoors. In order to help you, at Fuster Apartments we make you discover 5 of the best plans to make the most of July.

What to do in Barcelona in July.

Music festivals, culinary events and more. Here is a list of the activities you can do in Barcelona during the month of July, activities that will surely make your stay more pleasant in this city already full of life.

1. The Cruïlla Barcelona Summer Festival, a reference among the summer music festivals: 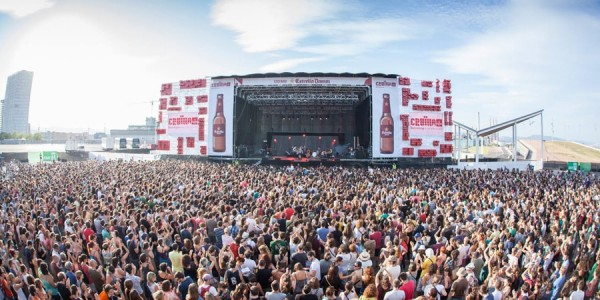 The Cruïlla Barcelona summer festival offers a cocktail of styles, cultures and sensations that bring artists of all sizes and sensibilities together. Its programme is eclectic, homogeneous and it mixs different styles of music. That’s where its name comes from: Cruïlla means rossroads in Catalan.

This festival is a meeting point of different musical styles. It is so renowned that even media and tour guides recommend tourists to visit the city.

The Cruilla began in 2005 in Mataro as serie of concerts and moved to Barcelona in 2008 as an urban festival of reference. A macrofestival music without borders.

In 2013 it opened to international public to finally become in 2015 the first festival in the world using the Full Cashless with PayPal system (a smart bracelet that allows to identify festival-goers and that theu can use as an electronic wallet for any purchase or payment they want to do within the festival). 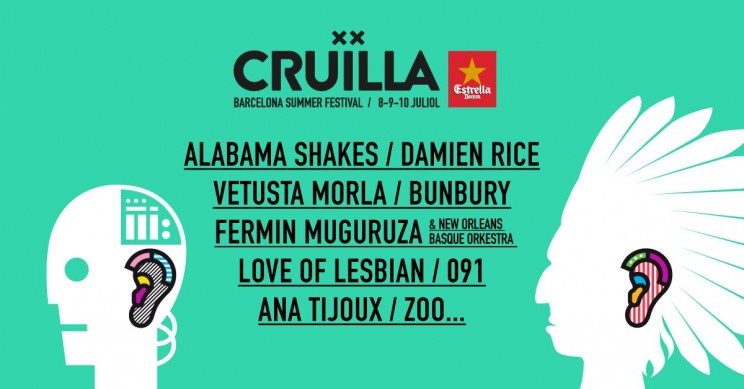 You can buy tickets and season tickets directly from the Cruilla website.

2. The Grec festival celebrates 40 years of theater, dance and music with world-class artists: 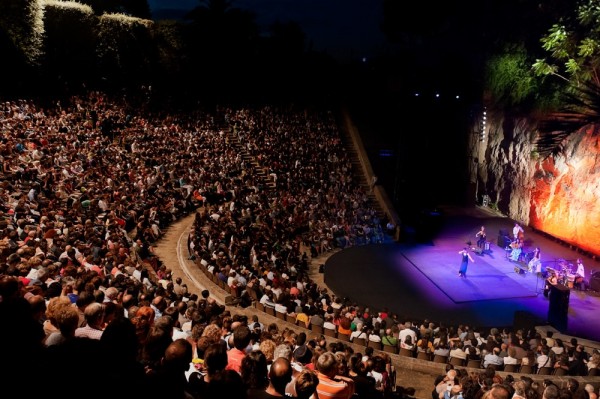 The Barcelona Grec Festival is an international festival of theater, dance, music and circus. With a long tradition in the cultural life of the city, it has not only become the main attraction of Barcelona’s summer, but also a reference in the European calendar of performing arts.

The Grec Festival of Barcelona is named after the central area where it will take place: an outdoor amphitheater (the Teatre Grec) built for the Universal Exhibition of 1929 in the Mount Montjuïc. Originally, this was the only stage welcoming the festival performings, but today the Grec also extends for many other theaters, cultural facilities and public spaces of the city throughout the month of July.

The different places to be at the festival:

The Teatre Grec, built in 1929 in an old quarry, is the soul of the festival. But it is not the only stage where you have to go to not miss the various shows of this festival of art, such as the Teatre Lliure, the Mercat de les Flors, the teatro Nacional de Catalunya, or the Auditori. The shows of the Grec Festival of Barcelona that are spread throughout the city will be played in public spaces and theaters like the ones we mentioned, but also in private rooms, from the Teatre Romea or La Villarroel to alternative boxes such as in, for example, the Sala Beckett or in the choreographic research center La Caldera.

In the latest editions of the Grec festival, some box seats have been incorporated into the programming, spaces that traditionally were not used to welcome plays. For example it was possible to attend shows or dance performances in areas such as the Library of Catalonia (a cultural infrastructure located in the old Hospital de la Santa Creu i Sant Pau, one of the sets of the most important civil Gothic of Catalonia), the Museu d’art Contemporani de Barcelona (MACBA), the Museu Picasso, the Centre of Contemporary Culture of Barcelona (CCCB), the Joan Miró Foundation or the art center CaixaForum. 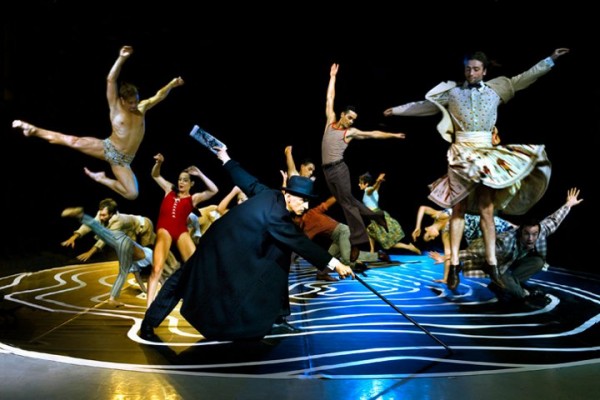 The 40th edition of the Barcelona Grec Festival which will take place from 1 to July 31, will feature 48 plays, 47 concerts, 16 dance shows and 8 circus shows, in addition to other various activities.

If you want more information about the tickets price, you can visit their website here.

3. Vespres Inedit’s is back in Barcelona, taste some of the best tapas in the best luxury terraces:

Here is a proposal, especially designed to those summer nights where the only thing we want to do is to go out for some fresh air on a terrace, in the company of friends. If you also are interested in gastronomic events, You cannot miss it!

Barcelona welcomes the ‘Vespres Inedit’s’ again, an initiative that allows you to visit the most exclusive terraces of Barcelona’s luxury hotels during July every day from 18pm to 21m. You can enjoy the 28 terraces of the most exclusive hotels of Barcelona, a unique experience that combines three designer tapas and 2 Inedit beers with an unique flavor to a single price of 20 € for two people. The perfect place to enjoy in the better way afterwork. To get an idea of what is waiting for you, stay tuned to this list that we offer and discover the types of menus you’ll find. 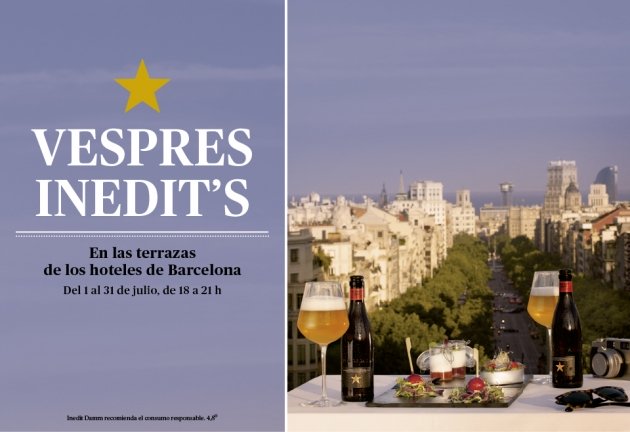 Relax in these incredible luxury terraces while enjoying the Vespres Inedit’s offer:

The B-Hotel in Barcelona, located on Gran Via de les Corts Catalanes, has a spacious terrace for sunbathing, an amazing pool unified with the surroundings and a terrace offering a panoramic view of the Plaza Espanya, the Gran Vía and of the shopping center Las Arenas designed by Richard Rogers. On this terrace during the Vespres Inedit’s, you will be able to enjoy Mexican nachos, diced salmon marinated with wasabi and Hummus with toastlets. The menu is served with two Inedit beers. 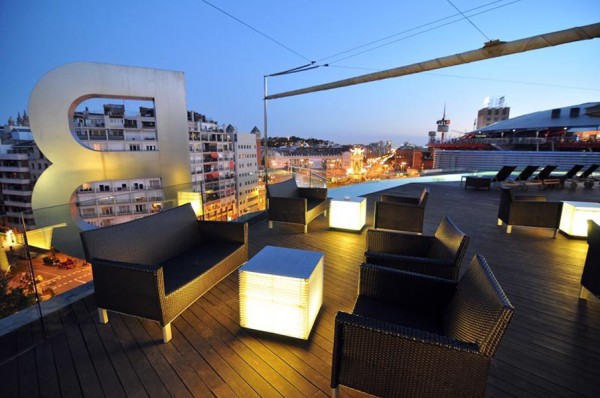 The Gallery Hotel is located in the city center of Barcelona, ​​just a few meters from the Paseo de Gracia. The Gallery Hotel terrace, called The Top, is located on its roof, allowing you to enjoy the heights in the heart of Barcelona. It has a large area with a bar and bar stools. The spacious restaurant area is housed under original wooden pergola and glass. In addition, the decking area for sunbathing is the ideal place to savor the best drinks and cocktails while the moon is reflecting in the original pool made of graphite, a real chill-out space. Here is the menu proposed by the hotel: papas arrugás potatoes with hot mojo bravo, crispy chicken wings with a BBQ sauce, fish fried in Moroccan batter (the menu comes along with two beers).

And finally, the Ohla Eixample is a new five star hotel located in the Eixample: between the emblematic Avenida Diagonal and Rambla de Catalunya. The hotel’s terrace is the ideal place to relax on deckchairs or to seek shade in its chill-out space where you can take an appetizer while looking at Barcelona’s panorama. The terrace also has a night & day bar. The Ohla Eixample is offering you for the Vespres Inedit’s, a cherry and cucumber gazpacho with a snow of feta cheese and spicy grissini, a par-cooked foie with toasted sweetcorn and Asian chutney, and steak tartar with a mustard foam and home made chips.

4. The culture at the center of the Raval’s Festa Major:

Once a year, in july (this year from 15 to 17 July), the Tot Raval (Fundació Tot Raval) Foundation, in collaboration with various cultural organizations in the Raval district, organize guided tours, routes through the city and activities in cultural centers and in local heritages, for free. The biggest party of the Raval comes with the supply of the Film Archive of Catalonia, which proposes activities such as the screening of “Ravaleja, el barrio visto por los vecinos”, of several documentaries and short films featuring people living in the district. 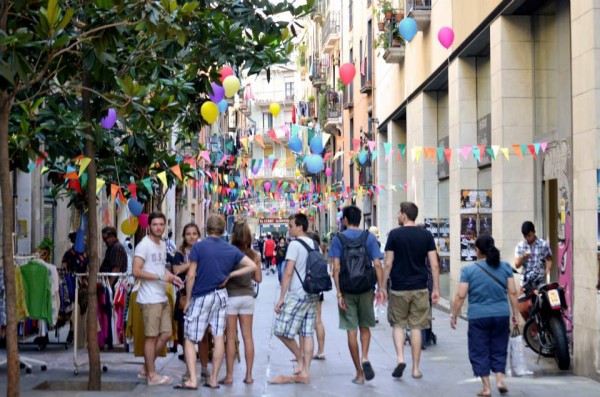 Some of the itineraries and proposed routes:

The routes through the Raval neighborhood allow you to learn a lot about the history of the neighborhood itself, but also on its social history as well as on its cultural heritage. Here are some of the proposed routes: “Aprendre a mirar”, “L’economia social, solidària i cooperativa al Raval”, “Per què Barcelona és com és? I com eren i com vivien les dones a Barcelona?”, “La Guerra Civil viscuda al Raval”, “Dos segles d’història del carrer Nou de la Rambla”…

Discover the secrets of the Raval neighborhood in museums. You will have the opportunity to visit the Gran Teatro del Liceu, during a guided tour: you can visit its scene, the largest area and the core of the ​​theater around from which the entire building is organized, its rehearsal and dressing rooms and its characterization room. The Palace Güell also opens its doors, offering the possibility to discover the main areas of this building designed by Antoni Gaudí, as the central hall, the stables, the rooms of the Guell family and the roof.

The CCCB presents works from the most diverse creative fields: design objects and furniture, graphic design, illustration, fashion, architecture, urban planning, art, crafts, film and photography, both digital as analog. You will meet African or African origin entrepreneurs, thinkers and designers, who, as “digital natives”, are enquiring at a global audience and who want to present the African continent to the world in a new perspective.

Some activities of this party have limited places, so, registration is required to participate in them. You can get more information on registration and schedules of activities here.

5. The Open air film festival 2016, outdoor cinema and much more:

You can experience an outdoor cinema this summer in Barcelona, ​​between July 1 and August 5. Do not miss the 14th summer edition of the Open Air film festival of Barcelona in Sala Montjuïc, which will present a selection of timeless movies, concerts, picnics and short films. The films will be screened in original language with Spanish subtitles. You will enjoy great popular classic movies on a giant screen, outdoor and lying on the grass of the Montjuïc Castle moat. Before each movie screening, a live music concert will be played and sometimes short films will be projected too.

Do not forget to bring something to sit (there is also the possibility to rent a chair for 3 €), bring a blanket or sweater in case there is a cold atmosphere that day.

And if you are someone who does not like to cook, not even a snack, you can buy something to eat or drink at the bar of the Open Air film festival 2016 outdoors. The Open Air Film Festival 2016 in La Sala Montjuïc will organize showings three times a week on Mondays, Wednesdays and Fridays, for five weeks between July 1 and August 5. You certainly can’t miss this great event that every year has more followers on summer.

Among the films proyected between Friday July 1 and Friday, Aug. 5, they are Thelma & Louise directed by Ridley Scott (1991), The Circus directed by Charlie Chaplin (1928), Mommy directed by Xavier Dolan (2014), The Silence of the lambs directed by Jonathan Demme (1991) … to conclude the event, during the night of 5 August, a surprise film will be screened.

Places to attend the Open air film festival are limited: 2500 people can only attend the event. You can buy tickets directly at the Castell de Montjuic or here. You can also buy tickets for attending several sessions. You will find all the practical information you need on this page.

As you can see, there is no lack of activities and events to attend during the month of July in Barcelona, ​​if you want to enjoy the summer.

Ah! And stay tuned to the blog. Next week we will publish the second part of activities and events not to miss in July in Barcelona.

Don’t miss the second part of this post here 🙂