The Primavera Sound Barcelona, one of the most popular music festivals in the city, starts with  authentic luxury line up.

During 1th to 5th June, Barcelona will be the epicenter for music lovers.
The Primavera Sound Festival has already become a reference and an appointment must in the international music calendar.

The festival is characterized by a wide range of musical genres including alternative, indie, electronic, pop, hip hop, dance, folk, jazz, metal and experimental music. A huge range to choose from.
Are you ready to live the Primavera Sound as it deserves? 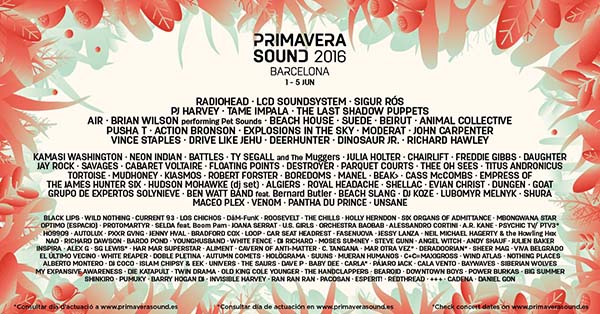 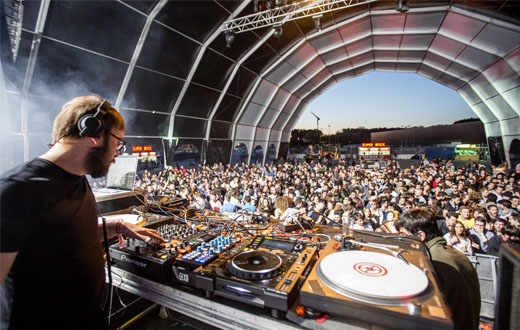 On Wednesday June 1th will kick off at Primavera Sound 2016 opening a day most intense. The Parc del Forum will host the headquarters for festival and welcome the audience so they can enjoy the best national and international artists of the moment and totally free.

The British band Suede with her charismatic leader Brett Anderson, psychedelic tribalism of the Swedes Goat, the southern sound of Expert Group Solynieve, pop punk of El último Vecino and the Barcelona grupo of the Doble Pletina will be the stars of this first great evening concert.

But the Primavera Sound does not end here. For the first time, an additional programming Music Festival will reach the Raval district of Barcelona with an excellent musical offer.

From 3 to 5 June at the Centre for Contemporary Culture in Barcelona (CCCB) a large number of concerts will be held within the reach of us all. The three location that will be installed in the Raval district will host more than 70 artists and bands.

The great variety of styles on offer during Primavera al Raval can be appreciated given the presence of heavyweights such as the American band Mudhoney, emblem of 90s grunge, the former frontman of The Go-Betweens Robert Forster, the solo show by Bradford Cox (known for his projects Deerhunter and Atlas Sound) or the garage madness of the Black Lips. With them, artists with an established career such as Cass McCombs and the dreampop pioneers A.R. Kane will perform alongside with young upcoming artists who will include Andy Shauf, Julien Baker, Alex G and the Italians C+C=Maxigross and contemporary sounds from the underground scene such as Downtown Boys and Old King Cole Younger.

In addition to its outdoor festivals, Primavera Sound 2016 has also created other big events like Primavera Club, a festival that takes indoor places in several places in different cities and a proposal to bring their music in different neighborhoods of Barcelona. Concert halls Barcelona, like Sala Apolo receive the spirit of the festival through Primavera als Clubs.
In addition, Les Corts, La Marina de Port, El Parc i la Llacuna del Poblenou and El Turó de la Peira neighborhoods will host a new series of free concerts under the name Primavera als Barris offer live concerts. The cycle is specially designed to stimulate cultural life in these areas that are not usually part of the usual circuits of direct and to give visibility to the talent that comes from there.

How to arrive Primavera Sound

From Monday to Friday from 5:00 am to 2:00 am/ Saturday and Sunday, non-stop service
There will be no special service due to the festival

If you need accommodation for the Primavera Sound this year, we will propose our city center apartments in Barcelona near the Sagrada Familia that allow you to attend the event due to its good location in the Eixample district of Barcelona.

Design apartment in a modernist building built in 1905. Holiday apartments fully equipped with basic amenities to make you feel at home.

Book our apartments near Sagrada Familia from 95 € / night. Here.
Ideal for groups of friends and family.

Also if you want all information on the Festival here.