If you are in Barcelona at the end of January, you will have the occasion to take part in an annual Catalan tradition, the cavalcada dels Tres Tombs, which includes a fairly unusual episode… Are you curious now? Good, curiosity is the starting point of discoveries, and Barcelona never runs out of curious events to satisfy your thirst for singular experiences! 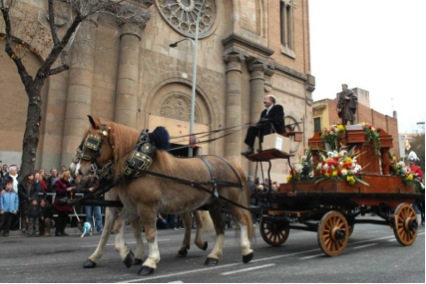 It has this name because traditionally, in villages, the parade used to take three times the same route, but nowadays there is only one passage in Barcelona, and the name remained the same despite this change. 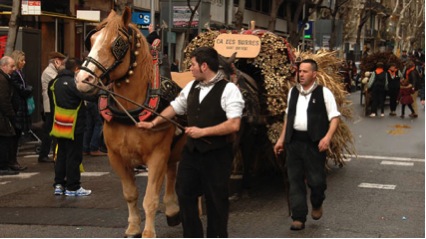 The Cavalcada dels Tres Tombs is a traditional Catalan parade that takes place every year at the end of January to honor Saint Anthony the Abbot, also known as Anthony the Great or Anthony of Egypt among many other aliases.

He is the patron saint of animals, carters, the poor, and the sick. According to the legend, Saint Anthony dedicated his life to protecting and ensuring the welfare of animals used in the fields, especially draft horses.

For this reason, people bring their pets to the Cavalcada dels Tres Tombs, and around 11:30, when the parade reaches the church called la Escola Pia de Sant Antoni (Saint Anthony Pious School), a priest blesses all the animals using holy water, the horses of the parade as well as people’s pets. Every year, hundreds of people, grownups as well as children, bring their dogs, cats, birds, hamsters or even ferrets to have them blessed.

Various chariots take part in the parade, from farmer ones to horse-drawn firefighter trucks, through ancient carriages, and other historical or unusual ones. The municipal police force called Guardia Urbana, as well as many associations and political parties also take part in the event.

The parade starts at 10:30 am at the junction between Carrer de Calàbria and Carrer de Floridablanca and ends at 12:45 at Plaça Sant Jaume.

If you are an animal lover, a tradition and history enthusiast, or simply curious, you know what to do on January the 23rd, and don’t forget to bring your pet!

For more information about the Cavalcada dels Tres Tombs, you can visit the official website.