After sharing with you the post of ‘Meet Gaudí in Barcelona’ Part 1, the second part explain and expand the works of architect Antoni Gaudí that you should visit if you have plans to travel to Barcelona soon.

The Palau Güell is one of the first commissions the famous architect received. It was built between 1886 and 1890. Located on La Rambla, it is an urban palace, home of the Güell family.

From the outside, you can admire its wonderful ornaments in wrought iron.

Declared a World Heritage Site by UNESCO in 1984, nowadays, after a long restoration, you can visit the palace in its original magnificence. The visit includes the five floors plus the basement, the ground floor, and the rooftop. The Palau Güell also offers a range of different activities: exhibitions, concerts, performances, poetry readings…

For more information about the tour, you can visit the official website of the Palau Güell. 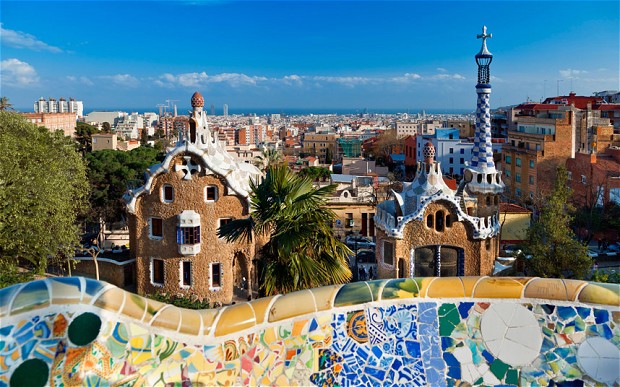 The Park Güell was commissioned to Gaudí by Eusebi Güell, it was meant to be an estate for wealthy families on a large property with a splendid view over Barcelona and the sea. 60 residences were supposed to be built, with a complex network of stairs and paths to link them. The vegetation recreates a Mediterranean environment, while respecting the species originally growing on the property.

The selling of the plot being difficult due to the lack of transport system, and the exclusivity of the project, only two houses were built. Eusebi Güell turned his property into a private park open to public events, and when he died in 1918, his heirs sold it to the City Council. The park opened as a municipal one in 1926.

The park is divided into two zones: a free area which is mainly vegetation, walks and columns designed by Gaudí, and the monumental zone.

At the south entrance of the park (Carrer d’Olot), stand two pavilions meant to be the porter’s lodge and his residence. Both have marvelous mosaic roofs, typical in Gaudí’s architecture.

In the entrance esplanade stands the wonderful Dragon Stairway, with goblins statues and the famous dragon covered in mosaic. Next to the stairs, two covered terraces forming grottos were meant to house the horses, and one of them is supported by a wonderful conic column.

The stairs lead to the Hypostyle Room, meant to be the market place. It is composed of 84 columns, some of them undulated, which was very original at the time, and still is nowadays.

In the center of the monumental zone, the large esplanade called Plaça de la Natura offers a spectacular view over the city. There, an undulating bench circles de place, allowing visitors to sit and enjoy the view after climbing the stairs.

The Parc Güell is like a door to another world, where nature and architecture live in harmony. A very unique place to understand Gaudí’s vision of beauty.

For more information about the tour, you can visit the official website of the Park Güell

To read articles about other works designed by Gaudí on our website: