Antoni Gaudí, one of the most famous artists in History, has had a huge impact on Barcelona’s architectural landscape. He was born in 1852 and died in 1926. He spent his life trying to find a balance between nature and civilization. Most of his buildings look like they had been shaped by the wind, like sand in the desert, and at the same time they are very functional and modern, for Gaudí was a real avant-gardist.

His modernist works are well-known all around the world, here are the most famous ones that you should visit during your stay in Barcelona. 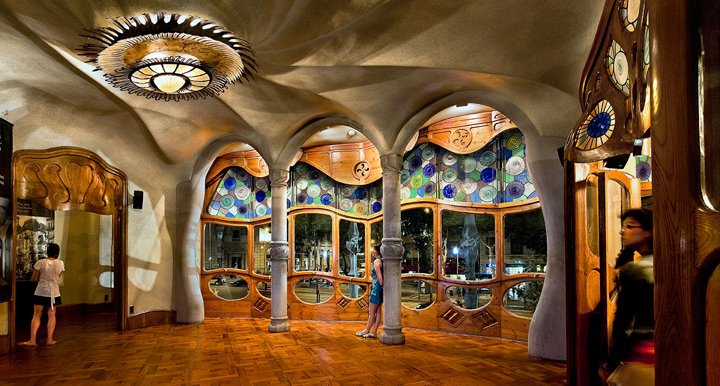 The Casa Battló, also known as “House of Bones” for its facade that looks like it was made of skulls and bones, is the most emblematic work of the Catalan artist. It has been part of UNESCO World Heritage since 2005. Located in Passeig de Gràcia, the building is very colorful and original. Indeed, its roof was designed to look like an animal’s back, and seems to be covered with multicolored scales, like a dragon sleeping on a pile of bones.

But it’s not only from the outside that the house reminds of an alive entity. Indeed, the interior structure looks like a skeleton, which is especially noticeable in the attic. The four floors of this masterpiece were integrally designed by Gaudí with his passion for harmony and originality, from the banister that looks like the spine of a gigantic animal, to the numbers on the doors, therefore the inside is really worth visiting.

Throughout the tour, the visitor is immersed in different atmospheres, feeling like he was underwater in the private entrance hall, in the forest in the study with its mushroom-shaped fireplace, in the ribcage of an animal in the attic, and on the dragon’s back on the roof terrace.

For more information about the tour, you can visit the official webpage of Casa Battló. 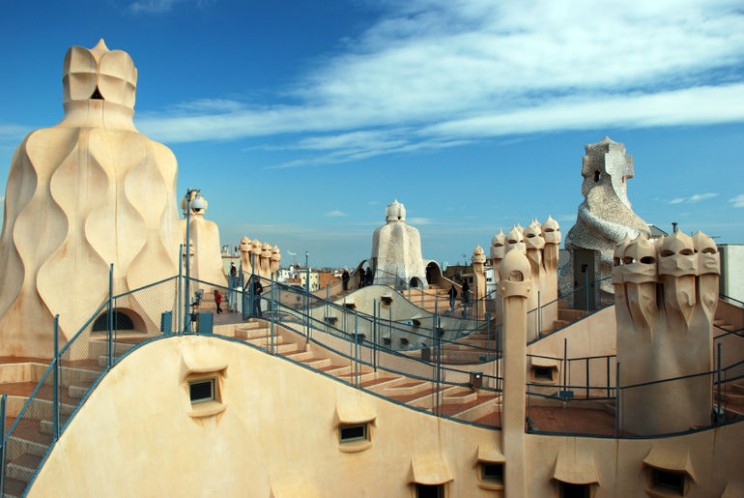 La Pedrera (The Quarry), or Casa Milà, is also a UNESCO World Heritage. It was built between 1906 and 1912. Nowadays, it houses a cultural center, Catalunya-La Pedrera Foundation, but at the time of its creation, it was meant to be a family home with apartments for rent.

During your visit of La Pedrera, you will have access to different museum areas, the Pedrera Apartment, and the Espai Gaudí in the attic, which shows a retrospective of his works, explaining his vision of architecture. The Espai Gaudí is divided in seven areas, including one entirely devoted to La Pedrera.

As for the Pedrera Apartment, it shows the typical home of bourgeois family in Barcelona of the beginning of the twentieth century.

The former residence of the Milà family houses the Temporary Exhibition Room, and is only available to visit when there is an exhibition.

“Gaudi’s Pedrera: The Origins”: a unique audiovisual show by night about the origins of life and the essence of Gaudí’s architecture.

For more information about the tour, you can visit the official website of La Pedrera.

To read articles about other works designed by Gaudí on our website: